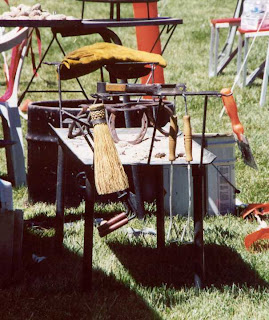 Last time, we had a more advanced topic. This time, let’s get back to the basics. As you begin your camp cooking career, you’ll discover a need for more specialized equipment. You might start using things outdoors, you would never need indoors.
Many cooks have published lists over the years. After glancing at most of them I discovered one cook's essential list is different than others. Some cooks buy fancy gadgets while others raid toolboxes and comb thrift stores. Some manufacture their own equipment, others purchase everything. Whatever your preference, I will try to list the basics and talk a little about some items.
There are three factors you must consider when finding needed tools. The first is handling HOT coals, second is handing HOT Dutch ovens, and third is handling HOT food. The operative word is HOT, and it should always be remembered. In the past camp cooks used a shovel to move coals from the fire to the pot, a forked stick to open the lid, another stick to stir with, and the ground to cook on. In our day, things have gotten a bit more sophisticated.
Today we can use Charcoal briquets, move them with a fireplace shovel, and place them with barbecue tongs. Many commercial lid lifters are available, but other tools can perform this function: pliers, a claw hammer, or bent re-bar. You could even use a forked stick, but my recommendation is the Mair Lid Lifter. 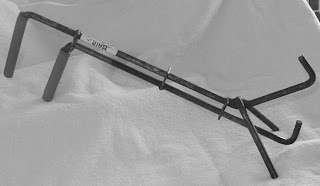 As you can see from the picture, this tool not only lifts a lid but it provides positive pressure so the lid won’t tip unless you want it to, very important when you are moving a lid with HOT coals on it.
Our ancestors most likely found a flat rock to set a HOT lid on while stirring or adding ingredients. We don’t need to worry about dirt and other debris because we have lid holders that are inexpensive. Even if you don’t have the money you can fashion them out of anything. Many clever cooks weld three horseshoes together in a ring and attach nails for a base.
One of the most important things you WILL need is a stout pair of leather gloves. This is a tool we share with our ancestors, but keep in mind you can still get burned even through leather. THe gloves should be loose fitting so you can shake them off your hand in a hurry (without using another hand). Always assume an oven is HOT and don’t pick it up without your gloves.
Of course you will need good utensils (stirring and dipping spoons). Remember the seasoning can be scraped off with a metal tool. But it’s your oven, you treat it how you want.
We’ve talked about three factors that dictate why tools are needed, but we’ve only touched the surface. There are many more convenient gadgets to make or purchase. Remember why you chose to cook outdoors. If it isn’t fun, don’t do it, and fancy tools can help make it fun. Like Tim Allen said in the TV show, "Gotta have more tools."

We’ll talk about different tools and their uses in future blogs, but for now I’m going to list a few.

As I said above, I will talk more on this subject in later blogs. Meanwhile, I have attached another easy recipe. Good luck and enjoy. 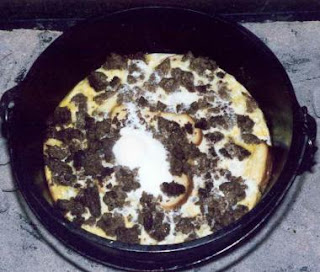 "Dutch" Toast
by Keith Fisher
12-inch Dutch oven
2 pkgs. Pork Sausage
(Jimmy Dean Reg.)
1 dozen large eggs
5 slices bread
In a 12 inch Dutch oven with bottom heat. Brown the sausage. Meanwhile; scramble 11 eggs in a bowl, set aside. Drain sausage and set aside for a moment. Arrange bread slices in the oven and sprinkle the sausage pieces on the bread. Pour the eggs over all, covering the bread. open the last egg and put it in the center. Bake with 9 coals on the bottom and 15 on the top. The dish is done when the egg in the center is done. Cut into wedges and serve with syrup or without.

Return to the
Neighborhood.
Posted by Keith N Fisher at 4:11 PM No comments:

Turning up the Heat

The newsman said it’s a red air quality day on the Wasatch Front in Utah. In the winter they call this a no burn day. It’s only a matter of time before the officials declare fire restrictions, so let’s talk about heat sources.

Traditionally, the only heat source for outdoor cooking was the coals from a wood fire. Of course charcoal, buffalo chips, and cowpies were used, but Charcoal had to be made and transported. Buffalo chips . . . well I don’t want to think about buffalo chips except to say, I’ve heard they burn too hot, making it difficult to control the heat.

We have charcoal briquets thanks to Henry Ford. I understand he needed a way to turn a profit on scrap lumber not used in making the Model "T" automobile. He ground charcoal into powder, added binders and pressed it into the pillow shaped Briquets we use today.

Briquets on Dutch ovens make cooking easy—just count coals. But how many should we use? There are many methods to determine this, but I have developed what I call the 325-degree/three-coal rule. It’s not rocket science, but it’s a good rule of thumb.

First, you need to realize the number on the lid of most Dutch ovens represents the inside Diameter of the pot. This is important because most recipes refer to this number.

In the rule, you start with the number then subtract 3 from the diameter and place that number of coals on the bottom. Now add 3 to the diameter and apply that number to the top. This will produce a 325-degree temperature in your oven. So, for a 12-inch diameter, we use 9 coals on the bottom and 15 on top. (This is a general-purpose oven. Or an oven that you can cook most things in.)

Then, for every two coals added or subtracted, the temperature is raised or lowered 25-degrees. Remember it’s three, two, and twenty-five or the 325-degree/three-coal rule.

One of the most asked questions about Dutch ovens is where to place the coals. I attached a chart below. 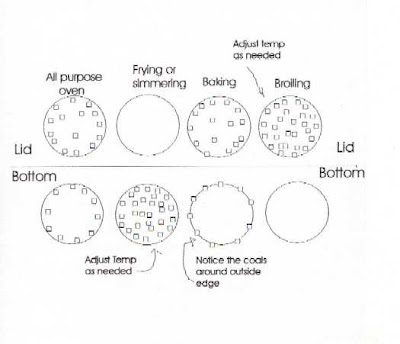 So how do we cook during fire restrictions?

My first answer would be propane. Most park rangers don’t restrict it, and you can cook many fine dishes on top of a stove, even inside a propane grill. Be careful though, the heat source is usually concentrated in one area. The hot spot created must be watched or your food will burn.

You can avoid this by using a steel plate heat diffuser. Really nothing more than a flat piece of steel with a few holes in various places, it deflects the heat and spreads it over the whole surface.

The Grill I mentioned above can be helpful. Basically, you place your oven inside an oven. The grill, however, is heavy and difficult to take on the road.

A few years ago, a man named Nick Manos invented a gadget called the Dutch cap. It was nothing more than a tube of steel with the top closed in. Vent holes were drilled into the lid. The apparatus trapped the heat from a propane stove, creating an oven enclosure. Nick is gone now, and I don’t think these are still being made. The Dutch cap had a thermometer attached, but the one you make needn’t be so elaborate. Keep in mind the diffuser mentioned above, would be needed.

There is another method called cooking with two lids, but it’s a little work. Put your pot in the propane burner. Use another burner to heat a lid then place it on the pot. When the lid cools down, place the second lid on the oven, while re-heating the first lid. Keep changing the lids until you are finished baking. This method burns the seasoning off so you may need to re-season.

We can’t continue without taking a moment to talk about the most important rule of thumb. Whatever the heat source, it’s HOT! You will get serious burns if you’re not careful. Also, mankind likes to think we have mastered fire, but like a maniacal killer it lies in wait. Hoping for a careless person to do something stupid. Please be careful.

Return to the Neighborhood.
Posted by Keith N Fisher at 4:44 PM No comments: