Smokin’ Maple ribs from Klondike and the Main Event

By Keith Fisher
Last week I posted the winning team’s desert from Klondike Cook off. We all know, desert should always come first, so I posted the Terry and Stuart Lewis’s pie.
This week, I’m going to post my absolute favorite dish from the cook off. I’ve always been a meat person. I’ve taken pride in my main dish recipes. When I looked at Terry Lewis’s sauce, I accused him of stealing it from me. When, while judging, I tasted the sauce, I knew it was much better. The rib dish Terry served was stand-alone. When they applied the sauce, they created heaven on a bone.
It’s likely they would have won best main dish with the meat alone, but Terry went on to make a rice bed that was mouthwatering. When I added the sauce, the rice almost (not quite though, are you kidding) made me forget the ribs.
So here, with that build up, is the recipe for . . . 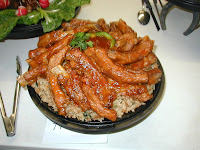 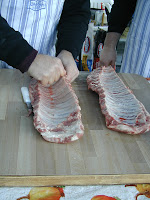 There you have it. Next week, I’ll post the bread recipe. In the mean time, mark your calendars for the Main Event. The 2009 IDOS World Championship Dutch Oven Cookoff will be held at the Sandy, Utah Convention Center, March 12-14. Starting with qualifying rounds Thursday and Friday and the championship on Saturday.

You can root for the Lewis’s as well as many others, and the returning champions from last year. I will be judging on Saturday come and say hi.

YourLDSneighborhood has added exciting new things to its website. Please drop by and take a look, browse around, check out our vendors, our radio station, our authors, our musicians and more. Check out the Neighborhood.

And while you're there, subscribe to the yourLDSneighborhood Newsletter. In addition to being able to shop in the new virtual neighborhood, the newsletter brings you articles, products, services, resources and interviews from around the world-all with an LDS focus. Look for issues delivered to your email inbox every week on Monday, Wednesday and Friday.