Note there are more pictures here! 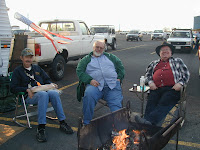 In Years past, the event was better attended and there were more cooks in the Taste of Dutch area. But 2009 was a great time. As you know, I spent a weekend last month at the Dutch oven Convention. Some folks call it the Mecca of Cast Iron Cooking. 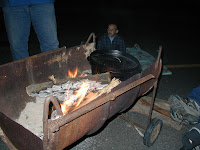 The weekend started off great with the Dutch oven Gathering (DOG) picture a big potluck dinner where almost everyone cooks something in Dutch ovens and everyone is invited to try it. Great food, good friends old and new. 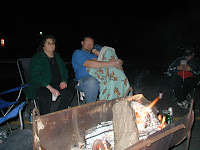 Because of mud in the campground area, we were allowed to dry camp in the parking lot this year. It reminded me of years past, when there were dozens on campers and trailers, people sleeping in the back of their trucks. Those were good times. Through it all was the food, and the love of cooking in Dutch ovens.
There weren’t as many people this year, but after the DOG, I brought out the portable campfire and we roasted marshmallows. Ranes Carter of Lehi, Utah, took us to Georgia by boiling peanuts in a Dutch oven. It’s a taste treat, although uncommon here, is very popular in the south. John Foster from Duchesne, Utah, brought out his guitar. Omar Alverez, of Idaho, Dutch oven cook and 2008 World Champion, played his washboard. They entertained us with sing along music, and poetry.
Others told stories and we enjoyed the campfire until bed time.
The next morning started early when the doors of the convention opened at nine. Classes started on time and the wisdom was priceless. This event has to be the best source of Dutch oven information there is. I’m very surprised anyone missed it.
The Vendors set up in building two along with International Dutch oven society. They included, Ram Kitchen Supplies, Winder Dairy and Farms, Colleen Sloan representing many vendors and teaching. There were Camp Chef, Lodge, and Warthog Blade Sharpeners. In the past, this has been a very lucrative event for Vendors. The advertising was priceless.
In the third building, the Youth Challenge Cook off was held, along with Taste of Dutch cooks. Here, we admired the abilities of the young people, while rewarding our salivating taste buds with many different kinds of food, cooked in Dutch ovens. These guys even provided recipes.
At Three p.m. and after a great day of Dutch oven mania, members of International Dutch Oven Society (IDOS) met for the annual meeting. Many new members attended their first assembly.
And then it was over. In the past, I hated the rush of trying to get packed up and on the road before dark, while saying goodbye to my old friends. This year, we stayed over and got home before church on Sunday.
All in all, the event, a precious gem, remains an untapped resource and it surprises me. So many people tell me they would love to learn to use their Dutch ovens. But they don’t take the time to come and learn from the experts. Other than World Champions, most of those who taught and demonstrated were your friends and neighbors. People who, just like you, wanted to learn to cook in their Dutch oven.
There will be another one next year. Make up you mind that spring 2010 will be when you start having the time of your life. It will be the beginning of many backyard parties and camping trips your family will remember forever.
And I’ll be there---I’ll bring the campfire.
Note:

You are invited to the launch party for Tristi’s new book, Saturday May 16th, 3-5 p.m. at Provident Book in Pleasant Grove (661 W State Street) Refreshments, door prizes, sales ... you'll have a wonderful time! And bring a friend!
Posted by Keith N Fisher at 12:11 PM 4 comments:


Two weeks ago, at the Dutch oven convention I promised the cooks of the youth cook off I would write a story and post it here. I told them I wrote for YourLDSneighborhood.com. Since then, the neighborhood has discontinued the blogs, and I’ve been busy with life.


I’m at a writer’s workshop today but I am continuing my series of blogs about the convention and today is the cook off. (See guys I told you I’d put you on the internet.)

I planned to be on vacation at the convention this year. I wanted to meet old friends, make new ones, eat a little, and joke a lot. When Terry Lewis, the current world champion and the person running the cook off told me a couple of his judges didn’t show up, I said sure. I always love watching the kids cook. By and large, they are better cooks than we are because they don’t follow the same conventions that we do.


I have lots of reasons, but I think the most important, knowing there is another generation coming up that will continue my love of Dutch oven cooking. Long after us "oldsters" have given in to our broken backs, the kids will still be providing food and propagating smiles. See more pictures here

This year, we had three teams. 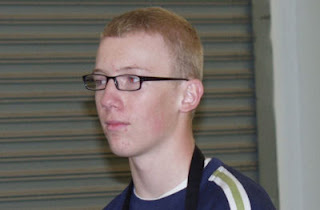 Tanner Jacobsen of Tooele, Utah. He’s been cooking in Dutch ovens for three or four years. He cooked Beef Meal In One and Strawberry Braid. 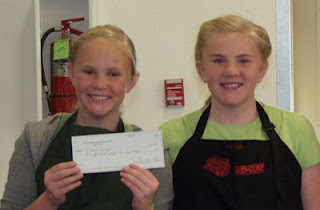 Taylor and Nicole Baugh, sisters, from Bountiful, Utah, have been cooking in Dutch ovens for three or four years but mostly, they’ve been watching Mom and Dad. They cooked Stuffed Roast Beef and Mandarin Orange Cheesecake Bread Pudding. 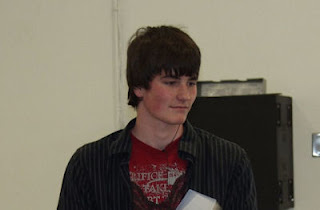 Kenny Ludwig from Fruitland, Utah. He’s been cooking since September and he made Beef Enchilada and Spiced Apple Pear Pie.


The dishes they cooked were delicious, and made me glad I’m not entering cook offs these days. In a couple of years these guys are going to more than hard to beat. With advice, (and only advice) from an adult supervisor, these young people went to work preparing their dishes with a professional flair.


As the Main dish Judge, I had me work cut out for me. But I was in the company of World Champions, and we had our day in the sun. Now it’s time for the kids to shine.


In the end, the winners were Taylor and Nicole Baugh – first place, Kenny Ludwig – second, and Tanner Jacobsen – third. They couldn’t have been more thrilled. They took home, coveted prizes and of course, the bragging rights.
Posted by Keith N Fisher at 11:59 AM No comments: