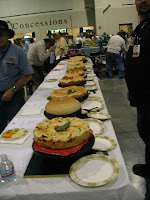 First, I need to make an announcement. The International Dutch Oven Society’s Annual Spring convention and Dutch oven potluck dinner will be held April 17 and 18 at the Davis county fairgrounds in Farmington Utah. This is your opportunity to learn from the experts, have fun, and eat good food. More about that later but you can get more information at http://www.idos.org/.

Back in the days before countertop machines and corner convenience stores, people made bread every few days. They didn’t fuss over, or worry about it. They just made bread. It was either that, or they went without.

It wasn’t that long ago either. Many people over forty remember bread dough rising in their mother’s kitchen. I remember the big Tupperware bowl my mother used. Often times, even though it goes against common wisdom, she put the dough in the fridge to let it rise. Keeping it cool delayed having to deal with it, and kept the dough from taking over the kitchen.

Like snippets of joy, the memories of hot, fresh baked bread, smothered in butter, will be forever cherished. I always fought with my brother for the heel, because it was always best when hot. (lousy for sandwiches). We were chastised many times for cutting both heels off a hot loaf. Without the support of a heel the hot bread would fall. (Again, lousy for sandwiches.)

In homemaking circles today, there seems to be a reluctance to attempt the bread making process. I have heard some people tell me they suck at bread. It’s true, some people make better bread than others, but its only because of fear and lack of a relationship to bread dough. I will explain later, but first I want to share what I learned at the cook off.

When I asked, what is the secret to good bread? Ross and Angie Conlin from American Falls, Idaho said, "Practice, practice, and practice." I know that sounds a little flippant, but it’s true.

Will and Jen Ward of Stockton, Utah said, "Lot’s of love."

Tony Thayne of Carbon County, Utah said, "Don’t be afraid of it."

Debbie Hair of Murray, Utah said, "Add your flour gradually and stick to a method." Baking bread is a science according to her.

Bruce Tracy of Ogden, Utah said, "Before you knead, put all your ingredients in a bowl except most of the flour. Then beat the &%3#2 out of it." He feels it’s most important to put air in the dough.

Phil Newman said, "If you can see the fibers and gluten when you stretch the dough, then you’re finished kneading. But," he said, "You can’t over-knead bread dough."

As you can tell from this small cross section of bread makers there are as many ways to make bread as there are bakers, but that should not discourage you. It just goes to show that it’s hard to screw it up.

The basics are simple. Yeast, kneading, first rise, second rise, forming, and baking. Of course the most important step is enjoying, but let's get you to that point.

First is yeast. There are many types of bread that don’t need to rise, but flat bread, corn bread, and pita’s are not what we’re talking about. There are many kinds of yeast. The little microorganisms of yeast are all around us. When a baker uses sourdough, he is encouraging the growth of natural yeast.

According to Daniel Leader in the book Bread Alone. With dry yeast, these micro cells remain dormant until mixed with warm water and flour. Then, they begin to consume the sugars in the flour. Note: adding sugar makes the yeast lazy. When the yeast consumes the sugars in the flour, they reproduce, and leave by-products of carbon dioxide and alcohol. The carbon dioxide, when trapped with well-developed gluten, starts fermentation. The alcohol flavors the bread. 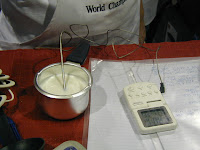 Okay the simple fact is this, good yeast and warm temperature makes great tasting bread. Proof your yeast by adding it to warm water. If it bubbles, it’s alive. If not get some more. This is why bread makers mix the yeast first.

Next to yeast, kneading is perhaps the most important step. So many bakers grow afraid of kneading. Remember: Pie dough doesn’t like touching. Bread dough loves it. So how do you know when you’ve kneaded enough? See above. Debbie Hair uses her science and kneads fo 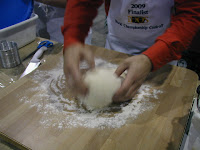 r exactly 10 minutes. Terry Lewis said, When it’s soft not quite sticky. It just feels right." Tony Thayne said, "Knead till your arms hurt. You are the Kitchenaide." The one thing everyone said is it’s done by feel, and I agree.

The terms soft, not sticky, and elastic are very important to remember. I once watched a master bread maker as she kneaded her dough. She slapped it around, tossed it onto the board, and pushed the heel of her hand into it. She put love into it.

Okay. Now I want to you to use any bread recipe. Make dough and start kneading it. You gave your kids Playdough. Now you do it with real dough. Have fun and learn the feel of it. Next week, I will finish this discussion.

Here's a secret. If you have a mechanical bread maker, make dough and stop, take the dough out and feel it. Stretch it. Knead it. You will begin to get the idea. Also remember to spread flour on your kneading surface. It will prevent sticking while you knead.


YourLDSneighborhood has added exciting new things to its website. Please drop by and take a look, browse around, check out our vendors, our radio station, our authors, our musicians and more. Check out the Neighborhood.

And while you're there, subscribe to the yourLDSneighborhood Newsletter. In addition to being able to shop in the new virtual neighborhood, the newsletter brings you articles, products, services, resources and interviews from around the world-all with an LDS focus. Look for issues delivered to your email inbox every week on Monday, Wednesday and Friday.
Posted by Keith N Fisher at 12:19 PM 4 comments: