Kid’s Can Cook/ but will they want to?

At two years old, my daughter seemed fascinated by the little gray rocks under the big black pots everyone made such a fuss about. With determination on her face she reached out to touch, but I stopped her. I gave her the standard warning. "It will burn you," I said.

After a short time my little girl experienced a burn. I don’t remember how she learned, but she understood the word. She seemed to lose interest in those gray rocks.

Then one day while cooking in five pots, I stepped away to get water from my garden hose. Sure enough, you guessed it, she reached under a pot and burned the tip of her finger. She knew would happen, but she just had to learn for herself. Some kids are like that.

Now she’s a pre-teen and it’s hard to get her interested in the things I like. Dutch ovens are different, however. I think I instilled an interest by forbidding her contact all those times. She has her own Dutch oven and one or two more she claims are hers. She’ll cook in them too, under the right circumstances.

I noticed, as I’m sure you have, that teenagers try to put distance between them and their parents. It just isn’t cool to show interest in anything Dad likes . . . unless, she’s the only kid there, or we cook something exciting.

What qualifies as exciting food?" you ask.

The answer of course, is whatever they eat regularly. If they love mac and cheese, teach them to make it in Dutch oven. Not the kind that comes in a box, learn to make the real stuff, macaroni and cheese casserole, then teach them.

My daughter has developed a love for fettuccine alfredo. I’m not sure why, but it's something she loves, so she makes it. The list is endless. Instead of making the pre-packaged kind, teach them the from scratch version.

Kids also love pizza and the Dutch oven was made for pizza. You can use frozen pizzas, or you can do it from scratch. It's more exciting to make it from scratch. Now, as you might have guessed, I’m going to talk about pizza.

How do you make pizza? You go to the corner pizzeria pay the cash and pig out right? Wrong.

Good pizza consists of four elements crust, sauce, cheese, and toppings. There are many good crust recipes but lets make it easier. Get some frozen bread dough, flatten it out, let it rise, put on the sauce, toppings, and cheese. Let your kids build their own, and let them experiment.

When it is built, put it in a Dutch oven . . . uh wait a minute. If you have ever been in the mountains trying to dig something out of your Dutch oven, scratching the seasoning off, you know there has to be a better way.

A Dutch oven lid makes a perfect pizza pan. Place the lid on a lid holder upside down. (You can use a wok ring or some kind of sturdy prop). The key is there must be room to put coals under it.

Next, put the pie on the lid. Be careful to make the crust the same size as the lid.

Next, turn your pot upside down and place it on the lid. Put coals under and on the top, the same pattern you use for baking. When the pizza is done (when the crust is done), you can lift the pot off. Use a rolling pizza cutter and enjoy.

One note about safety: this method requires caution. The Dutch oven will be hot an 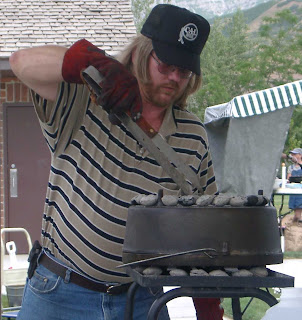 d lifting the pot off the lid must be done with long sleeved, leather gloves. The ashes will want to fall in you food, and you can get burned, even through leather.

Now that you remember the cautions, I would advise you to practice this before you turn it over to your kids. If all else fails put it the oven right side up and let your kids find the perfect amount of cheese. You may end up eating Dutch oven pizza three times a week, but it’s a small price to pay to get your kids involved. More importantly, though, your kids will learn to love something you love—you will have something in common. 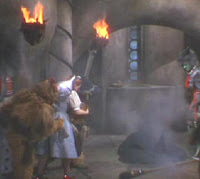 It’s been so hot lately around my house I’m beginning to identify with the Wicked Witch of the West. “I’m melting—melting, what a world, what a world.” If you’re like me, the heat puts a damper on outdoor cookout plans. I remember a cook off when it was so hot we almost didn’t need charcoal. The heat from the coals raised the already high temperature into triple digits.

What if I told you about a cold treat you can make in a Dutch oven? Would you consider staying outdoors? We often associate cooking in Dutch ovens with heat from square charcoal briquettes. Have you ever considered cooking with square ice cubes? What’s that you ask? No, I’m not 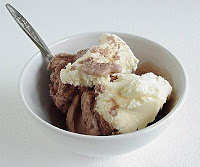 crazy, in fact I’m going to tell you how to make ice cream in a Dutch oven.

It’s best to use an aluminum Dutch oven, although, cast iron will work too. The reason for aluminum is simple. Since the material heats up quickly it also cools quickly with no adverse affects. You must be careful with cast iron because it doesn’t react well to quick temperature changes.

Here’s how to do it with dry ice:

In a cooler large enough to fit your Dutch oven, place a small block of dry ice. Put a towel or old T-shirt on that. Mix up your favorite ice cream recipe in your Dutch oven and place the pot on top of the old towel. Then wrap another block of dry ice in a towel and place on top. Cover the cooler. Agitate the mixture by stirring frequently. When it’s frozen, enjoy. 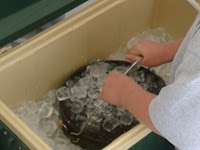 There are other ways including using regular ice cubes and rock salt. Then twisting the Dutch oven to agitate, just like an ice cream maker. It’s more fun to hear the compliments when you open your Dutch oven and scoop out the cold treat.

I’ve included two recipes for ice cream, and I gave credit to those who made them in a cook off I attended. 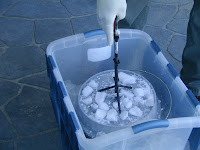 In a large bowl combine half- &-half, sugar and vanilla. Stir until sugar dissolves. Stir in whipping cream. Pour into Dutch oven. Pack ice and salt around the Dutch oven that is set inside another container. Cover top with dry ice. Open and stir every 20 minutes, until ice cream is set up.

Cream the eggs and sugar together in a mixing bowl. Add the cream and mix thoroughly. Add the remaining ingredients and stir with a whisk until completely incorporated. Add this to a 10-inch Dutch oven. Place this into a lager container such as a 15 inch deep Dutch oven. Surround the 10-inch oven with ice and coarse salt. (Do not fill above the lid line) Add some dry ice to the lid of the 10-inch oven. Cover the larger container and insulate with your choice of insulation. Open the oven occasionally and scrape the sides and stir the mix to distribute the temperature evenly. Serve when the mixture has set to your satisfaction.

Since it’s hot outside, you might want to explore other cold possibilities. Toss a green salad in a chilled Dutch oven. Make a fruit salad. People will be thrilled to see it in a Dutch oven. When you get brave, you can try a cheesecake or key lime pie. Everything is possible, and aluminum is a wonderful thing. You can take it directly from the fire and plunge it into the ice, a necessary thing in order to make cheesecake.

The point is, don’t let the heat stop you from having some of the best Dutch oven dinners you’ve had. There are many ways to beat the heat. Maybe I’ll talk about some of them next time—then again, maybe you could suggest some to me. 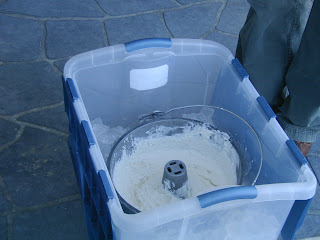