Dreaming of a Backyard Kitchen 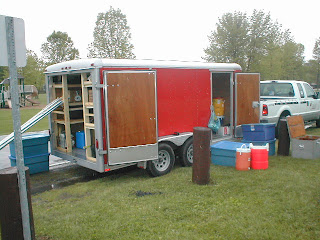 I’d just finished schlepping my equipment to our assigned area in a cook off when my good friend put a hand on his back and said, “You’d think I’d come up with a lighter hobby.”

I said something like, “Either that, or hire someone to load/unload, setup/takedown. Then you could show up just in time for the cooks meeting and enjoy the fun part.”

It seems, every year at this time my mind turns to thoughts of permanent outdoor kitchens and chuck wagon trailers. Of course those things wouldn’t eliminate all the hard work it takes to be a culinary hero, but it would be nice. To be able to carry a sack of groceries to the back yard and start cooking on a moment’s notice, without having to endure the heavy setup and take down.

It’s true, camp cooking has many labor intensive operations attached to it. There is, however, nothing better than sitting in your lawn chair, surrounded by a group of people with satiated appetites, knowing your equipment is all packed.

After an interesting dream last Saturday night, I made a pilgrimage the next day. I went back to the Vineyard Ward Chapel. Okay, my pilgrimage was only about six miles. Anyway, I drove to the church I attended from about one year old, until I turned fourteen. It’s a common practice in an area of growth for the LDS Church to divide stake/ward units. It happened to us, and we ended up going to a chapel on the other side of town.

I hadn’t been back for some time. I wanted to go inside, but I decided to not interrupt the meetings going on. I drove around the back and looked at the building. There have been a few changes over the years, but I was able to envision the things I remember.

One thing that hadn’t changed, however, was the outdoor fireplace. Well, they might’ve put in a damper, and they covered the whole area with a pavilion. I remembered attending many ward activities as a kid, on that patio next to the fireplace. I roasted hot dogs in front of it, and I joined my friends in climbing up the cold chimney.

While turning the truck around during my pilgrimage, I turned to my daughter and told her I used to climb up inside that chimney. I'm sure she was impressed. Well, maybe not.

The journey helped me remember things long forgotten. Some of the repressed memories explain why I do things the way I do. Seeing the old fireplace inspired my dreams and gave me an idea about the backyard kitchen I plan to build someday. I wonder if the neighbors behind me would object if I used part of their yard to build my pavilion.

There in the corner, would stand the fireplace of my childhood. (With a chimney screen to keep children out.) In my design, the wings would be similar, but one would have four built in camp chef burners and an imbedded steel plate in the brickwork. It would be large enough to hold several hot Dutch ovens. The other wing would have a counter top with a draining sink. Under that counter would be drawers, a water heater, and propane storage. I’d connect to the sprinkler system for water, and the drain would go to the sewer.

Well, it’s not totally finished in my mind yet, but when I’m done, It will be glorious. Maybe I’ll invite you all over. Make a comment and tell us your plans for the perfect backyard kitchen.

Thanks to Dave Horton of North Collins, New York, for the pictures of his Dutch oven equipment Trailer. There have been many built since, but he made one of the first ones I ever saw. 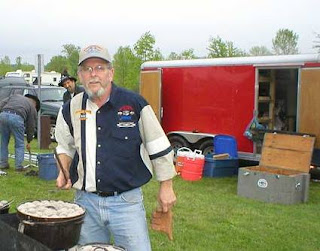