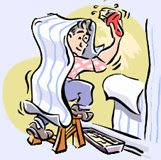 I’ve been waiting for my friend to send me pictures to show you, but the Ward party went well. Remember, I mentioned, we were told there would be 250 people? There were many more.
We cooked four Pineapple glazed hams, Five batches in four pots of beans, five Turtle cakes, nine cobblers, and a pile of hotdogs. The line lasted for 35 minutes, and the ham ran out before the line did.
I promised to tell you about a new way to fix hot dogs. I’ve been making corn-on-the-cob in a water cooler for years. All you do is change the hot water once add butter and condensed milk. No fuss, and very little effort.
I wondered if it works for corn, why not hotdogs? I got several packages of hot dogs, put them in the cooler and added hot water, twice. They swelled up and were terrific. It not only worked but the ward loved them.
As you might imagine, I was as busy as a, one-armed paperhanger. If you’ve ever hung wallpaper, you know how busy that is. I didn’t get a single picture taken, however I have been promised copies of the ones my friend took. Maybe next time.
Posted by Keith N Fisher at 7:57 AM 2 comments: