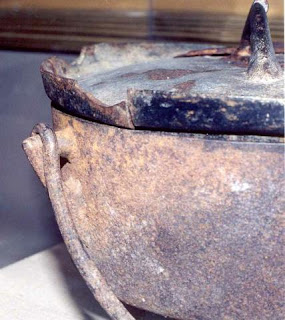 Where has summer gone? Last spring, I planned to spend my summer catching up on social commitments, and cooking for my family. I planned to hold the block party. I’ve postponed it for a few years. Like all of you, I’m running out of weeks, and school has started again.

Enough of my whining, how are you doing with your list? When trying to think of something to write about, I remembered a story you might enjoy. My dad told it to me once, while we were fishing.

After talking about his youth, and a treasure hunt Dad participated in, he told about a bank robbery that took place in the early 1900’s in Spanish Fork. The robbers, Chuck and Jed, had heard about a large payroll so they made plans to steal it. They were outfitted for a trip into the mountains on horseback leading two packhorses. The daylight holdup left the two men running from the law. They stuffed the loot into Jed’s saddlebags and lit out, up the canyon and over the mountains to the east.

In that small town, it didn’t take long to raise a posse, and the robbers were feeling the pressure. At the Diamond Fork River, they separated. Jed turned one of the packhorses loose, and rode up the fork. Chuck continued up the canyon to Tucker. He climbed into a boxcar, headed up the summit. He heaved a sigh of relief. He didn’t have to worry, Jed had the money, and they promised to meet in Denver.

Even with the helper engines, the train traveled slowly up the grade. Halfway to the summit, in a place called Dry Fork, the train slowed to a stop. The boxcar door slid open, and the posse pulled Chuck out of the car. They beat Chuck, but he never revealed the identity of his accomplice. He went to prison for the robbery.

Years later, after his release from prison, Chuck found Jed in Vernal, and demanded his share of the money.

"I can’t give it to you," Jed said. "I’ve been looking for that loot for twenty years. I just can’t find it." He went on to tell Chuck what had happened.

After they separated, Jed got nervous. He knew the posse wasn’t far behind and he suspected they would follow him and not Chuck. He needed to travel faster, so he considered turning the other packhorse loose. That’s when he got an idea. He figured if he didn’t have the payroll with him, nobody could accuse him. He could always come back for it.

He didn’t have much time. He put the money into a Dutch oven, and stuffed the pot in the cavity of a rock. Jed sent the packhorse in a westerly direction, climbed onto his other horse, and made good time over the mountains to Denver. When he heard Chuck went to prison, Jed tried to get the money. He tried for twenty years, but he never found the place again.

"Where do you think it is?" Chuck asked.
"I know it’s somewhere between Springville Crossing and the Strawberry Valley," Jed hung his head. "I’m so sorry, I would’ve tried to make your life easier in prison if I had found the money."
According to the story, Jed died a year later, after trying to help Chuck find the Dutch oven. Chuck spent the rest of his life looking but he never found it either.

Doesn’t that story stir the imagination? Does it make you want to go and look? The details in this story are fiction and I’m not sure if the story is true, but I’d like to think so. If the story is true, and you found the Dutch oven. What would be more valuable to you? The money, or the Dutch oven? Theoretically, a Dutch oven with the lid held down should be airtight, and should protect the contents. So I ask you again, which would be of more interest to you? What would you do if you found it?

The answer, for me, is the Dutch oven. The money would be too old to spend anyway, and the government would probably force me to turn it over to them. The Dutch oven is a link to the past, an antique that represents a happier time. When life was easier—when icehouses were big business. Just think if the cast iron was seasoned, and if the rocks protected the pot from the weather, I could clean it up and cook with a 100-year old Dutch oven.

Notice the picture above. The Dutch oven is in the LDS Church Museum in Florence Nebraska. Its over 150-years old.

Breaking the Ice and Other Fun Things 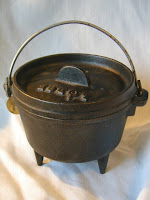 Last time, I told you about the backyard party that I planned to throw at my house.

My group of blog writers had been planning to get together forever and I finally offered to cook. When the guests arrived, I had been cooking for hours. I made roast beef to die for, and the easy baked beans recipe I posted a few weeks ago. Also the peach and cherry cobblers were great with ice cream. My guests brought a delicious pasta salad, watermelon, and drinks.

Needless to say, we ate a good meal, and the conversation held the interest of those of us who write. Our spouses, however, though patient, were probably bored. I realized I’m out of practice. I used to plan great parties with get acquainted games, guessing games, and other things to do, along with good food.

There are many things you can do to make your party interesting. It’s always a good idea to have a separate table for the kids. A piñata comes to mind for a party with a lot of kids, but have you ever thought of doing one for adults? Instead of candy and kid’s toys, you could fill it with adult stuff. You’d be surprised how fast adults loosen up when greed is involved.

Have you ever tossed a water balloon into the middle of a circle of aged adults on a sweltering hot summer day? I did, last year at a family reunion. The old folks barked as you might’ve guessed, but I saw the look of relief, the hey that feels good look came on their faces and you’d be surprised how fast they were involved in a water fight. The trick got the old folks off their lawn chairs and gave them a refreshing activity while they waited for the Dutch oven dinner I cooked. A little warning though, you might really tick someone off, so you’d better make sure of your guest’s sense of humor before you try this.

I’m sure you can come up with your own activities for your backyard party, but let me tell you about one of my favorites. Find a decorative container. Use a clear glass one if you want to make it easier. Fill it with candy corn or something people are familiar with. Make sure you count them but don’t tell anyone. Ask your guests to guess how many, and write their guesses on a piece of paper. You collect the papers and at the end you give the container away to the one who was right. It’s cheap and fun and your guests will remember it. 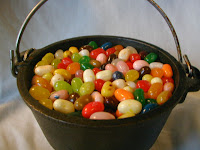 Now that I’ve mentioned a few icebreakers for your party, I want to announce a contest. This is a 5-inch

Lodge, Dutch oven, manufactured in 1988. It’s filled with Jelly Belly, jelly beans. Guess how many? Write your guesses in the comments section and I’ll announce the winner on this blog in two weeks. 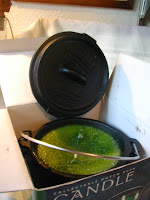 If more than one of you guesses correctly, the person who posted first wins. The winner will get a real, 5-inch Campchef Dutch oven, with an evergreen scented candle inside. You must make your own arrangements to get it from Orem, Utah to where you live.

I’m going to put you on your honor. DON'T CHEAT! I realize you could get a 5-inch Dutch oven, and count jellybeans, but what would be the fun of that? Keep in mind, however, Lodge doesn’t make this oven anymore. They replaced it with a slightly larger size. On your mark, get set, go.

In the mean time send me your ideas for icebreakers and I may use one at my next backyard party.