On a previous blog, I promised I would talk about chuck boxes, but I’ve been getting sidetracked with other, more exciting subjects. Since the weather is turning and with it, thoughts of getting our equipment into shape for the big Deer hunt. I think I’ll get back to it.
When I was a kid growing up in Utah, it was fairly easy to get a license and go hunting. Most of the hunting population didn’t even make plans about where they were going to hunt until the end of September. We usually got together and listened to the scouting reports from one or two who had gone on the archery, or some other, earlier hunt. From the report, we decided where we would go and usually opted for the customary place.
We had a special canyon we hunted every year. We knew all the names and the geography. It felt good to know some things never changed. Then the DWR rewrote the rules.
Now we have to submit to a drawing, choose which hunt we are going to hunt, and which area we plan to go, all before the end of January each year. If I choose to hunt on the archery hunt, I’m done and can’t hunt deer any more that year. I must decide in the winter before, which hunt will be most successful and which area will have the most deer. Unless I want to hunt alone, I must pick the same area my family chooses.
With all the hoops we have to jump through, it’s not hard to visualize what happened this year. I went online on the last day to register, one hour after the deadline. All my other family members have similar stories, and needless to say, We’re going fishing on the deer hunt opening. But I digress, I promised I’d talk about Chuck boxes.
Everyone has some sort of container for the tools it takes to cook and clean up in the outdoors. I started with a storage tub and bucket. Everything went downhill after that.

In many cook offs, people were judged for their equipment, so I wanted something that looked the part of the old west, but was still functional as a transportation box. I ended up building the refrigerator size Chuck box I used to store Dutch ovens in. It’s not only as big as a refrigerator, it’s heavy too. I soon wore out and began to think about other ways.

My next camp kitchen was designed to be like an old chuck wagon box and I used thin plywood and light materials. Being four feet wide. It was awkward to carry and became a burden to move for one person. At this time I also designed a pot box, or Dutch oven storage box. It was the

perfect size to place two washtubs on top, next two the end of a banquet table. We washed dishes while sitting in a camp chair. Carrying even that was a two-man job.

At that time, I noticed a set of clear plastic drawer cabinets on sale and got an idea. I had never seen anyone use those for a 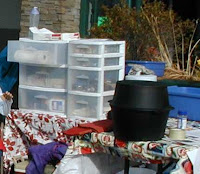 camp kitchen, and although I can’t prove it, I think I was the first to use one. Now if you go to cook offs, you may see many of them.

The Refrigerator sized box now stores Dutch ovens and collects dust in my carport. (It has to. Who would move it?). The wide box remains in my back yard. I use it to cook in the back yard. The plastic drawer cabinet sits in my dining room. We keep it filled with all the tools we need to cook in camp. One person can put it in the back of the truck and it sits easily on a picknic table.
Whatever you use, it should be easy to carry and simple to use. It should hold all the tools you will need to be successful, and don’t forget to stock it with toothpicks.


Return to the Neighborhood.
Posted by Keith N Fisher at 4:39 PM No comments: 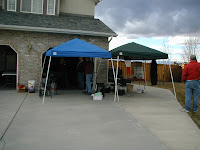 We had heavy rain over the weekend at my house. It looks like difficult weather has come to stay. Perhaps it’s time for us to talk about shelters and cooking tents.

I remember setting up to cook between two buildings at the Davis County Fairgrounds in Farmington, Utah. I didn’t have an awning, tarp, or anything. We were a little worried when the fog rolled in off Farmington Bay, but it soon burned off and the sun shined.

It was a great day. Many folks learned about Dutch oven cooking, and all the food was delicious. The success was short lived, however, by afternoon, thick clouds rolled in and rain seemed eminent. We hurried to finish and get packed, but the water put out my fire.

Wind driven rain and hail got into the drawers of my chuck box. At one point, I noticed a river of water dripping off my cowboy hat. It could’ve filled a five-gallon bucket in minutes. We were wet, cold, and miserable. I had to clean the rust off of everything when I got home. 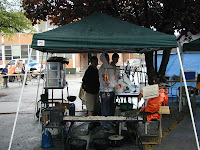 On another occasion, I stood shivering under two Easy-Ups. the wind and rain was coming down in horizontal sheets. I was the advisor for my ward’s Varsity scouts while they competed in the Scout Expo cook off. In an effort to get warm, I turned my backside to a propane stove and caught my shirttail on fire. The boys did well, the food was good, but everyone wondered about my ability to lead boys. 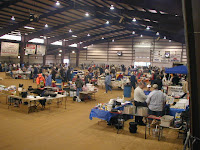 Over the years, I’ve cooked under many covers and in many shelters. I even cooked inside a few buildings. I watched portable awnings blow away, and I’ve cooked in the open air. Here are my conclusions.

When you cook outdoors, you must deal with wind, fire, rain, snow, and sunshine. Too much of these can make your day miserable. A good shelter can help. If you opt for the open air, remember you’re leaning over a fire. Why add more heat to you’re body by standing in the hot sunshine? 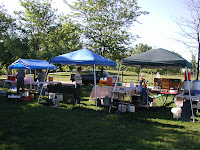 A portable awning works well for this. I call these Easy Ups after the brand name. There are a few brands of these and if you keep an eye out, most of the stores put these on sale after the season. The last one I purchased cost $65.00 on sale and it’s better than my other one, which cost more. There are two standard sizes of this type of shelter, 12X12 and 10X10. The latter size fits in a parking space and can be taken almost anywhere. 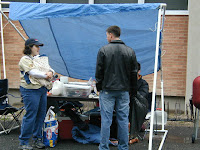 Another shelter that works well, is the plain old tarp. If you can tie off four-corners, or use a frame, this can be the cheaper solution. Cooking under your awning attached to your camp trailer can work fine, but as I found out last summer, microburst winds can cause great heartache.

There are portable car garages, and makeshift carports that work well but most are too large for just one camp kitchen. If there is a pavilion use it. But keep in mind if you are too closed in, you’ll breathe the fumes from your charcoal.
I cooked under my carport one winter, using a cheap brand of charcoal. I had a cold at the time, and I believe the overdose of chemical fumes made my cold worse. By January, I had pneumonia. I threw my stock of cheap charcoal away, and started cooking in a less sheltered area.
In the case of the driving rain, I recommend an anchored cover. Close in one or two sides to keep the wind out, but allow for a draft to carry away the fumes. Ideally, you will have a shed awning with three sides closed in and a blower vent above the cooking table. But that’s the subject for another time.
Return to the Neighborhood.
Posted by Keith N Fisher at 3:32 PM 3 comments: