I recieved a challenge from Tristi Pinkston to go to the sixth folder in my pictures folder, post the sixth picture I find there and explain. Well, first, I had to eenie, meenie, mineie, and moe to decide which picture folder on which hard drive on which computer. I must have picked right, because I ended up in my Library of congress folders of Dutch oven cookers. I had to convert the image from Tiff to Jpg but here it is. 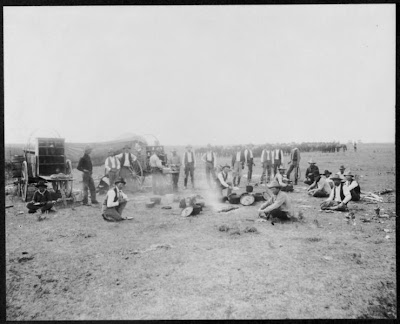 This is an old picture, taken in 1905 on a wyoming cattle drive. the caption says something about Breakfast. In the tiff version, you can see much more detail but this illustrates the idea that we've gone soft. look, no campchairs, no table, no motorized ATV's, and no motorhomes.

Just a chuck wagon, horses (the first ATV), a bedroll under the stairs or under the wagon if it's raining. Sit on the ground or your feet. oh yeah, times have changed.

Below, is my camp on the fourth of July a few years ago, We were camped in the LDS church's, Mutual Dell Campground, in American Fork Canyon, Utah 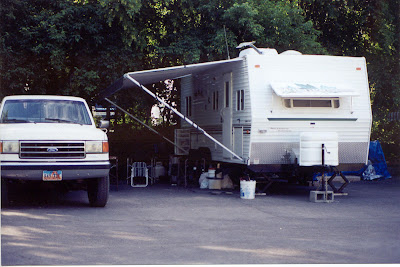 I realize, I might be tagging someone twice, but here goes. Heather, Nichole, Kim, Darvell, Gaynell, and Connie they are my ctritique group, and the LDS writer's blogck.

Sorry to do this to you but you've been tagged by me to do a post about "7 things you never knew about me." Sorry. It had to be done. You're one of my favorite people to read and one of the first people I thought of when I wanted to know more about someone.

*crossing my fingers that you won't be mad.*

nope nope no way. I'm not mad but I don't think I know that many htings about me. guess I'm going to have to read my journal. I shall comply gladly. thanks for reading my ramblings you are a good friend

Thanks for tagging me, Keith. Heather beat you to it, though. At any rate, you can find my sixth picture at my blog.

thanks Nichole. by the way I tagged you before Heather did. you just noticed hers first. eithway thanks for playing