A Dark and Stormy Night 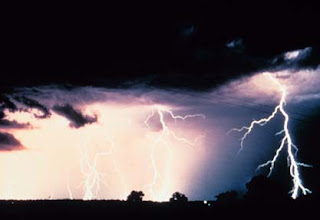 We’ve been having thunderstorms where I live, and there have been power outages all over the area. My power went out about 10:30 last night. I called about midnight to report the outage and they said it would take about three hours. It never came on. Now I sit pondering what to eat for breakfast.

It seems I've fallen into the trap of microwave breakfasts. I could set up my Dutch ovens and make a wonderful breakfast, but who has time for that? The whole situation puts me in mind of my great grandmother Fisher.

In order to feed breakfast to her large brood, she rose early, built up the fire in the cast iron range, and started cooking. Between other chores, she kept her family fed. Rumor has it, she would start a pot of cracked wheat on the range before going to bed and by morning it would be mush.

Life has certainly gotten easier since then, but is it better? Cast iron cooking is great for camping, and in the back yard, but few people cook in it everyday.

The power was back on by 7:30 but the linemen found another, apparently common problem farther down the line. The cables that run under our subdivisions are getting old and the insulation is wearing out in places. broken insulation allows water penetration and causes it to ground.

The linemen show up, cut the power, then run DC current back through. When the ground appears, they know where to look in order to repair it.

The jocularity and camaraderie of the linemen was shared by some of us from the neighborhood. I had a lot of fun watching them repair the line. It made me wish I had the presence of mind to make breakfast in my Dutch ovens for the bunch of them.

Now that I think of it, I really wish I had. Maybe next time, they would fix my power outage before the others.